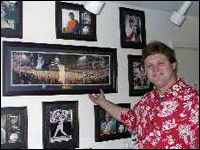 Dr. Peterson was first introduced to Chiropractic after he returned from serving two years as a missionary. He was in a great deal of pain and swelling in both knees, resulting from old injuries while playing football and basketball in high school. After exams, x-rays and arthroscopic surgery, he was told by an orthopedic sports specialist that his knees were deteriorating and that there was nothing more that could be done. The problem continued. Dr. Peterson went to see Dr. C. Keith White, DC in Glendale who examined him, viewed x-rays, began to adjust his low back and, for the first time in months, relief was evident. Within a few months, the pain and swelling had subsided and he was able to resume sports activities such as water skiing, racquet ball, and basketball. It was then that Dr. Peterson decided he wanted to help others in the same way and began his pre-med training at Brigham Young University, transferring to Pasadena College of Chiropractic in 1983.

Doc John, as he is known by his patients and friends, is very active in the community with Kiwanis, Key Club Adviser at local high schools, Special Olympics, Orange County High School All-Star Baseball game, and high school athletic and band events.

Growing up with Disneyland and the Angels, Doc John’s office decor reflects this interest and love of Orange County. He resides in Hacienda Heights with wife Kathleen and three remaining children at home of nine.

Why Us
Your First Visit
Meet The Doctor